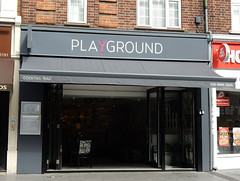 As of February 2015 it was under refurbishment to open as a cocktail bar called Playground.