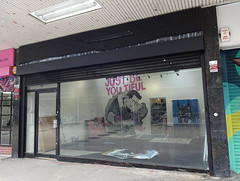 It was previously an artist's studio occupied by Rich Simmons, but as of June 2018 there's a notice stating that Rich has moved to a new studio photo.

It was previously occupied by a tarot reading, alternative therapy, massage, and beauty treatment business called Violet Moon photo, but this moved to 26 Avenue Road, South Norwood, some time between March 2013 and late 2014.

It was vacant as of December 2014, but as of February 2015 signage had appeared for a loft conversion company called Loft Dormer photo. We never actually saw this open.

When we walked past in late July 2015 there was what looked like doll's houses and play tents in the window, though the shutter was only partly raised so we couldn't see much. Retro CR0 photo, a second-hand clothes shop specialising in stocking clothes from a variety of different countries, was open by late September 2015, but closed down some time between December 2015 and July 2016.

It remained vacant until February 2017, when work began to turn it into Quintestencil Studios, an artist's studio occupied by Rich Simmons.