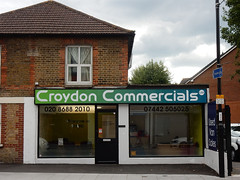 Although there are staff on the premises, it's primarily used as an office and is not generally open to the public.

It was previously known as Skyline photo, but changed its name to Croydon Commercials some time between February and July 2015. It appears to still be run by the same people though.

The building was previously leased by Letsallmove, a lettings and property management agency photo. We're not sure if this ever opened though; as of early August 2012 there seemed to be things like tins of paint and rolls of wallpaper sitting around inside.
Existence last checked in December 2019.
Selsdon Road ...