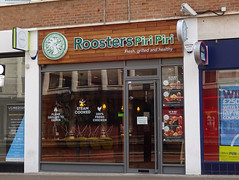 Chicken shop on Wellesley Road. It opened in early 2018.

A postage and shipping firm called Post & Packing photo opened some time between July 2015 and late September 2015 (August 2015, according to their website). Some time between January and August 2016 this moved to North End Mall (which runs through Croydon Village Outlet) photo of notice.