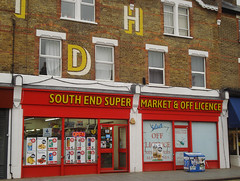 Supermarket, off licence, and newsagents on South End.

This is a double-fronted property comprising number 91 on the left and number 93 on the right. According to a photo on Flickr, as of 1970, number 91 had signage for Broomfields and number 93 for United Dairies, though it isn't clear whether either business was still trading at the time (most easily visible at original size).

It was previously known as Select Super Market & Off Licence photo, but changed its name between November 2014 and February 2015, probably as a side-effect of the Connected Croydon public realm improvements.