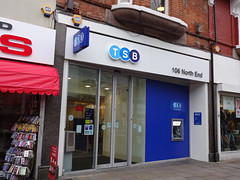 Bank branch on North End, with one external cashpoint.

It was previously branded as Cheltenham & Gloucester photo, but in September 2013 it rebranded (along with other C&G branches) to TSB.

For a significant part of the 20th century, the building was occupied by W Barratt (later Barratts) shoe shop: see photo from 1937, photo from 1955, photo from 1984. Barratts still have a branch in Croydon, further down North End at number 30-32.