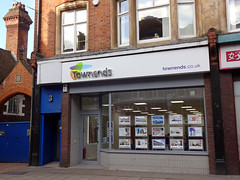 Estate agent on George Street. It moved here from 83-85 High Street around the end of December 2018/start of January 2019.

It was previously a branch of the Yorkshire Building Society photo, but this moved down the road to 66-68 George Street in September 2016 photo of poster.

As of December 2018 there was a sign up stating that a branch of Townends estate agents would be opening on 2 January 2019 photo; this still hadn't happened as of 4 January, but by 22 January it was definitely open.