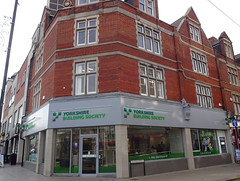 Building society on the corner of George Street and Wellesley Road. It has one external cashpoint. It moved here from 3 George Street in September 2016.

It was previously Bradford & Bingley (as of July 2009, according to Google Street View).

It was later a branch of Santander photo, but this closed down by October 2014 photo. As of that month there was a notice in the window photo stating that the nearest remaining branches were at 128 North End and 46 George Street.