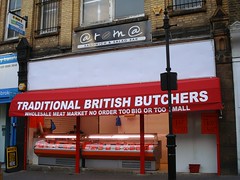 Butchers on Surrey Street. Unlike most of Croydon's butchers, it sells pork.

As of early October 2013 it didn't have a proper name; it only opened very recently and the staff told us they hadn't decided on a name yet. However, as of April 2015 it still appears to be called "Traditional British Butcher".

The premises were vacant and advertised to let as of July 2012, with signage indicating that the previous occupant was an engraving shop called Engraving Plus photo.

In October 2012, CyberSpace Internet Cafe (previously located further down the road at number 37) moved in photo, but closed some time in late 2012. As of February 2013 the door was chained and padlocked photo, and as of May 2013 it looked fairly stripped out inside.