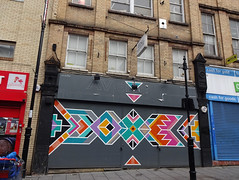 Business premises on Surrey Street. It was previously a hairdresser called Avenu Hair photo, but this closed down in December 2016. Still vacant as of May 2017, June 2018, May 2019, and December 2019.

As of July 2012, the shop was vacant and advertised to let, with signage indicating it was previously occupied by a runners' shop called Runathon photo.

A hairdressers called Avenu Hair photo opened in April 2013, but closed down again in December 2016.