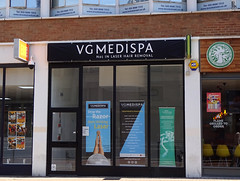 It was previously a beauty salon called VG Medispa, but this closed down by October 2019.

The premises were vacant photo and advertised to let as of July 2012.

In March 2013, planning permission was granted (ref 13/00147/P) for use as a restaurant/cafe. In June 2013, further permission was granted (ref 13/01215/A) for an illuminated fascia, with plans making it clear that the cafe would be a branch of Just Falafel. As of July 2013 signage had appeared for Just Falafel, and Liz Sheppard-Jones reported on Twitter that it was due to open on Saturday 27 July (though according to a member of staff a few days later, it actually opened on the Sunday).

Just Falafel photo closed down some time between November 2013 and February 2014.

A new business called Grill@12 photo opened in February 2014, selling sandwiches, burgers, and fresh juices, but this closed down again in early 2016.

The premises were vacant as of July 2016 photo, September 2016, January 2017, and March 2017. Still vacant as of June 2017, but in the process of being refurbished to open as a business called Smooth'd. This was open by July 2017, as a beauty salon specialising in hair removal photo. It became VG Medispa some time between February 2018 and May 2019; we aren't sure if this was just a rebranding or a completely new business, but in any case it had closed down again by October 2019.