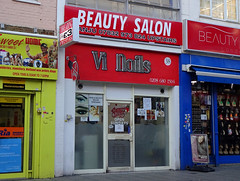 Manicurist on Church Street. It also has a beauty salon upstairs.

According to a photo on Flickr, as of c. 1985 the premises were occupied by a TV and video rental shop called DER (most easily visible at large size). According to Google Street View, as of July 2009 the occupant was a hairdresser/beauty clinic/nail bar called Tran's Avanti Salon.
Existence last checked in December 2019.
Church Street ...