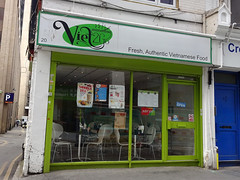 Vietnamese cafe on Surrey Street. It opened in April 2015.

By February 2015 it had been split back into two single units, and number 20 was advertised to let photo. It remained vacant until April 2015, when Viet2Go opened.