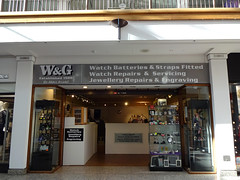 Watch and jewellery repair place on the lower level of the Whitgift Centre. They also do engraving. It was previously in Allders Mall (for 35 years), but moved here in August 2019 photo of notice.

A vape shop called Evapo photo opened in November or December 2015, but closed down again some time between April 2017 and July 2018 (though their other branch at 7-9 Crown Hill remained open).