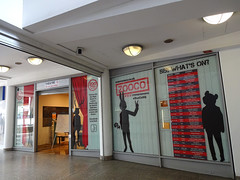 Theatre space on the lower level of the Whitgift Centre. As of mid-2018 it's run by theatre company Zoo Co under the name Theatre on the High Street; this project is due to run until the end of July.