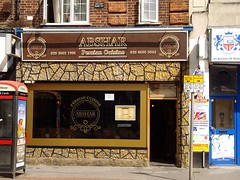 As of August 2012 Paradise was closed photo, with signs in the window stating "opening soon / redecoration / under new management". By February 2013 it had reopened as Abshar, though in June 2013 it was still using plates with the Paradise Garden name on photo.