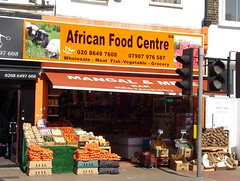 It previously occupied two adjoining shopfronts at 64 and 66 London Road photo, but in early 2012 it gave up number 66 to Kodo's Barber. In early 2013, it changed its name from Cosco photo to African Food Centre, though little else seems to have changed.

As of January 2012, the frontage advertised African, Afro-Caribbean, and Asian groceries, along with halal meat, fish, grocery, fruit & veg, and bakery. Not sure how much of this is still there now the premises have reduced in size, but the butcher's counter was definitely still there in April 2012.