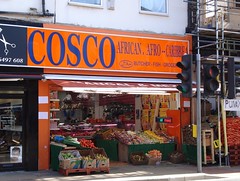 Previously occupying two adjoining shopfronts at 64 and 66 London Road photo, in early 2012 it gave up number 66 to Kodo's Barber.