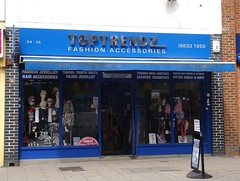 Business premises on Church Street, vacant as of August 2015.

It was previously a jewellery and fashion accessories shop called Top Trendz, but closing-down notices appeared in the windows of this in May 2015 photo, and by August 2015 it was vacant and stripped out photo taken through window.

According to a photo on Flickr, as of c. 1985 the site was occupied by a shop called Art Wallpapers (most easily visible at large size).
Church Street ...