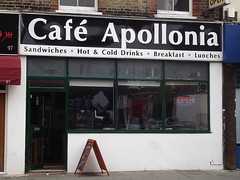 Note: This may have closed. As of February 2017 we've been past several times during the advertised opening hours and it's not been open; also, there's a pile of unopened post on the mat.