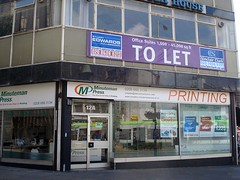 As of early October 2013, Minuteman Press had started the process of moving elsewhere in Croydon. They told us that they didn't yet know where they'd be going, but they were trying to move ASAP. However, this move never seemed to actually happen.