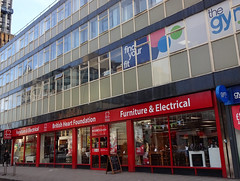 As of July 2012, all four premises were vacant but with signage indicating they were previously separate businesses. See photos: number 7, number 8, number 9, number 10.

In October 2012, the British Heart Foundation were granted planning permission for use of numbers 7-10 Suffolk House as a furniture & electricals charity shop. As of late February 2013, the four shopfronts had been painted red, posters and the name "British Heart Foundation Furniture & Electrical" had appeared on the frontage, and shopfitting work was going on inside.