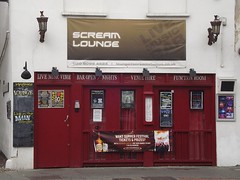 Note: As of early 2014, they seem to be going under the name Showcase Lounge at least some of the time.