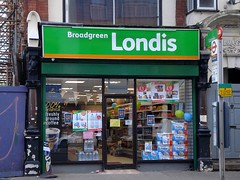 The name on the front is "Cake Walk", but a business card collected in December 2015 instead had "Cake Park".