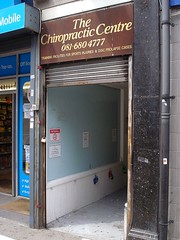 Business premises on George Street. It's on the upper floors but has a street-level entrance. Vacant as of October 2018. Still vacant as of July 2019.

It was previously occupied by an alternative health care provider called the Chiropractic Centre, but this moved some time in 2017 to Solutions Gym on Lansdowne Road.

According to a photo on Flickr, it had been there since at least c. 1990.
George Street ...