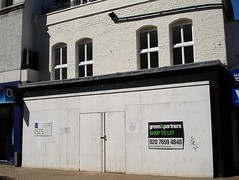 The occupant as of December 2011 was a shoe shop called Sole Trader (or possibly Soletrader or Sole|Trader) photo. This had closed by May 2012, with the premises boarded up and advertised to let. In August 2012, however, Sole Trader had a planning application granted for 72 North End a little further along the street.