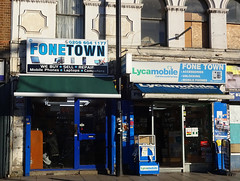 According to a photo on Flickr, as of c. 1985 the right-hand side (along with neighbouring A & S Trading Agency) were occupied by a Help The Aged charity shop. According to another, by 1989 this had become the Helping Hand "charity gift shop". By May 2012 it was Fone Town, a mobile phone unlocking and accessories shop photo.

The left-hand side was previously occupied by a minicab firm called Kendall Cars photo, but some time between May and July 2016 this changed its name to Minicab.Com and moved to 13 Suffolk House, George Street. According to a photo on Flickr, Kendall Cars had been there since at least 1989.

After the departure of Kendall Cars this side remained vacant for around a year, but some time between March and July 2017 the Fone Town people took it over for use as an electronics buy/sell/exchange shop and internet cafe (which they had previously operated under the name Electronics Exchange a few doors along at number 28).