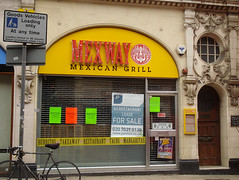 It was previously occupied by a Mexican fast food place called Mexway, but this closed down at the end of January 2015.

As of August 2012 it was vacant, with signage indicating that a Mexican fast food place called Mexway would be opening there soon photo. Mexway photo opened in November 2012 but closed again at the end of January 2015 photo of sign.