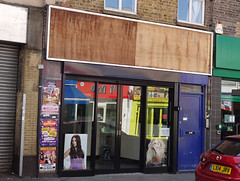 Hairdressers on Church Street. It opened some time between late March and early July 2014.