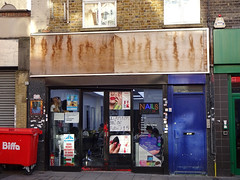 Nail salon on Church Street. As of December 2018 it doesn't have a sign up and we don't know what it's called.

Another hairdressers called Precious Hairdressing Salon opened some time between September 2016 and April 2017. This never acquired a sign (we found out the name from a member of staff), and was closed again by June 2018.