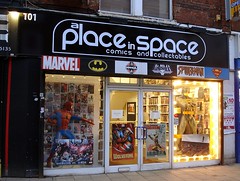 Previously a comics shop on Church Street, as of late 2013 these premises were closed to the public photo of sign and used only for storage of stock. The public shopfront of the business moved just across the road to number 96.