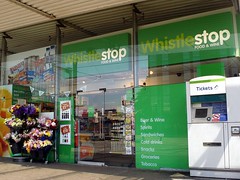 According to the Croydon Advertiser, it's due to become a branch of Caffe Nero.