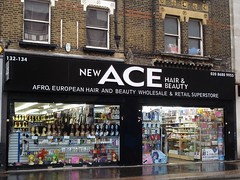 As of June 2012, the frontage states that it's an "Afro, European hair and beauty wholesale & retail superstore".

Accessibility: No steps to get in, and it's step-free throughout. The aisles are uncluttered and relatively wide.

This is a double-front property comprising numbers 132 and 134. According to a photo on Flickr, as of July 1978 the left side (number 134) was occupied by Mancini Menswear and the right side (number 132) by Dunn & Co. According to another photo on Flickr, as of c. 1991 the left side was occupied by Goodness Records, with Dunn & Co. still there on the right side.
Existence last checked in April 2014.
North End ...