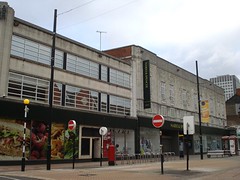 Large M&S branch on North End, near West Croydon Station. It also has an entrance in the Whitgift Centre.

Clothes, homewares, furniture, food and drink. The food hall is on the first floor. There's also a cafe, accessed via a ramp or a small flight of steps from just by the food hall.

According to a photo on Flickr, it's been there since at least c. 1985 (most easily visible at large size).
Existence last checked in December 2019.
North End ...