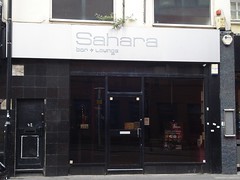 As of August 2019 signage has appeared for something called Oasis photo, but it's not clear what this is going to be or when it will open.