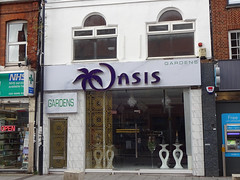 Shisha place on South End. It has a small bar area at the front, and a shisha garden out the back. It also does food (grills, skewers, and burgers).