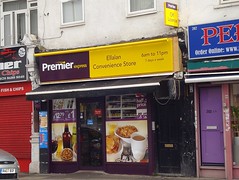 Convenience store and off licence on London Road, sub-branded as Premier Express.

It sells storecupboard products, loo roll, cleaning products, etc. Nothing particularly out of the ordinary, though there are a few South Indian products (parathas, vadai) in one of the freezers. The off licence selection includes a few relatively interesting bottled real ales. Also sells sweets and soft drinks.

As of January 2012, the frontage advertised "Asian, African, English foods" photo. See also a photo from December 2013, during the middle of the Ellalan takeover.
Existence last checked in April 2014.
London Road ...