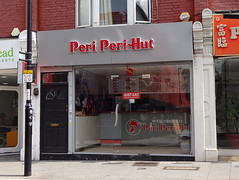 Chicken shop on Selsdon Road in South Croydon. It opened some time in 2019.

By August 2012 it was a chicken shop called Chihetos photo, but this became Baraka photo some time between December 2015 and September 2016. This probably closed by early 2017; as of February 2017 we'd never seen it open despite going past several times.

As of October 2017 the premises were vacant and filled with random bits and pieces photo.

As of early December 2017 there were signs up for a chicken and pizza takeaway called Tasty photo, though it seemed not to quite be open yet. We're not sure if it ever did open.

By October 2018 there were signs up stating that a piri-piri place called Galito's would be opening soon photo. As of February 2019 nothing had changed — the signs were still up but it still wasn't open. Around the end of April 2019 Galito's instead opened at 10 South End; the owner told us that there had been a problem with the lease at 8 Ye Market, so he found different premises.

Signage for Peri Peri Hut appeared by August 2019 photo, though it wasn't clear whether it was quite open yet. It was definitely open by December 2019 photo.