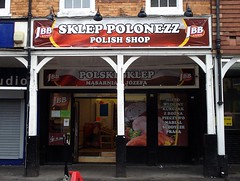 The frontage also has the name in Polish: Sklep Polonezz/Polski Sklep. It was previously called Polstar photo.