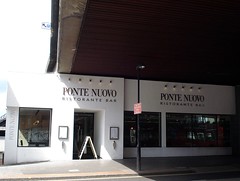 Italian restaurant and bar on the High Street.

It opened in February 2012 and has the same owners as neighbouring Cantina and Caffe Del Ponte. Before Ponte Nuovo and Caffe Del Ponte opened up, the owners had another restaurant (Il Ponte) across the road in the space now occupied by Buffalo American Bar And Grill.