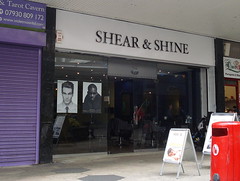 It was previously a barbers and hairdressers called Shear & Shine, but this closed down in late 2016, with the company pivoting to become a supplier of black men's grooming products.

The premises were previously occupied by a hardware shop called DIY Den, which according to a Croydon Advertiser report (now vanished from the internet) was opened in January 2009 by one of the ex-managers from much-loved hardware shop Turtle's. According to the lady who took over the premises next (see below), DIY Den closed some time around March 2012.

As of March 2013, the shutters were down, a lockbox had been installed outside, and peering through a hole in said shutters revealed that the stock had been removed from the interior photo.

Shear & Shine opened in June 2014, initially with no sign on the frontage photo, though by August it had acquired one photo. This closed down in late 2016, with the company pivoting to become a supplier of black men's grooming products.