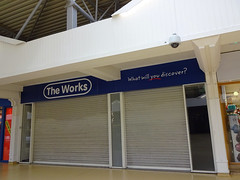 It was previously a furniture and homewares shop called My Home Choice photo, but this closed some time between September 2013 and July 2014.

This unit was previously occupied by Card Factory, who moved to a larger unit at 1107-1108 Whitgift Centre in the latter half of 2012. It remained vacant until at least June 2013 photo.

My Home Choice had opened by September 2013, though it didn't put a frontage sign up immediately photo.