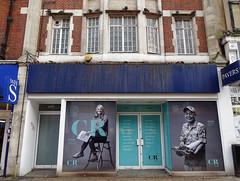 According to a photo on Flickr, as of 1989 the premises were occupied by a branch of Freeman Hardy Willis.

By May 2012 it was a branch of Barratts shoe shop photo, but this rebranded to Pavers photo some time between April 2014 and July 2014 following an earlier purchase by Pavers of several Barratts stores and an agreement to allow Pavers to trade under the Barratts name for a few months. Pavers then moved a couple of doors up to Croydon Village Outlet in May 2015 photo of window with sign, photo of vacated shop.

It was still vacant as of July 2015. A clothes shop called Avers opened in October or November 2015, with a new name created simply by removing the "P" from the frontage sign and the projecting sign photo. According to a manager in November 2015, the intention was to continue under the name of "Avers". However, by January 2016 there were "closing down" signs in the windows, and by mid-February 2016 the premises were vacant and stripped out.