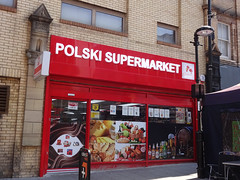 Polish grocery shop/delicatessen on Surrey Street. It opened on 11 January 2013 under the name of Polskie Delikatesy photo, but some time between May 2017 and June 2018 changed its name to Polski Supermarket.

They sell fresh vegetables and cured meats, as well as packaged products. They also stock Polish-language books. There's a couple of tables near the front for eat-in cakes/patisserie and hot drinks, and they have a children's play area just next to this.

It was vacant photo and advertised to let as of July 2012; the estate agents' advert suggests that the premises were previously occupied by a branch of Savers (a health and beauty product shop).

Pewex Polish Delikatesy opened on 11 January 2013. As of mid-January 2013 they were still working on fitting out the front of the shop [https://www.flickr.com/photos/kake_pugh/8371600412/ photo but there was plenty of stock in the back part.

Accessibility: No steps to get in, just a very very shallow ramp.