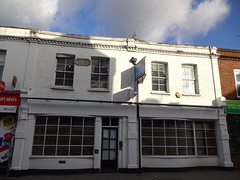 By August 2012, 5-7 Selsdon Road was occupied by immigration lawyers 1st Contact Visas and Philip Gamble & Partners. By November 2014 another set of lawyers, Peter Lock and Company, was also in residence photo. However, these all moved out some time between October 2017 and December 2019, apparently to One Croydon next to East Croydon Station.

As of December 2019 it was vacant, with a notice in the window photo suggesting that it either was currently being or had previously been squatted.