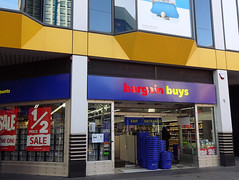 Discount shop in Centrale, with a frontage on North End. It opened some time between August 2018 and January 2019.

It was previously a branch of Zavvi photo 1, photo 2, but was taken over by HMV in early 2009.

The HMV chain went into administration in January 2013 and the Croydon store photo was identified as one of 66 branches likely to close. It did indeed close in March 2013. Although HMV was later bought by Hilco, the Croydon branch remained closed, and by June 2013 the signage had been removed photo.

The unit was still vacant as of October 2013, but as of late March 2014, work was underway to reopen it as a branch of the Poundworld pound shop chain. This was open by April 2014 photo, and sold all the usual pound shop things, including groceries, toys, and gardening stuff. It closed down some time between June and August 2018 photo of unit photo of notice, likely due to the company going into administration.