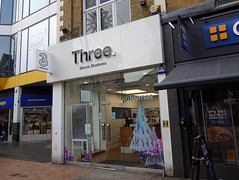 Mobile phone shop on North End. It was previously branded as "3 Store" photo, but changed to "Three" some time between July and September 2015.

According to a photo on Flickr, as of c. 1985 the premises were occupied by a shop called Jeans West.
Existence last checked in December 2019.
North End ...