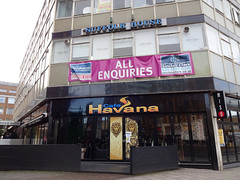 Cafe/bar on George Street near East Croydon Station. It opened in November or December 2016.

It was previously a printing and copying shop called Minuteman Press photo.

As of early October 2013, Minuteman Press had started the process of moving elsewhere in Croydon. They told us that they didn't yet know where they'd be going, but they were trying to move ASAP. However, they didn't actually move until June 2016, when they moved to 19 Stafford Road, CR0 4NG.

As of November 2016, signage was being installed for Cafe Havana photo, which also had a presence at 20 South End. This was open by mid-December.