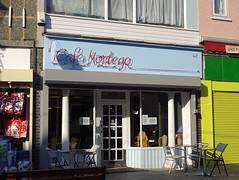 Child-friendliness: They have at least one highchair.

Accessibility: No step to get in. Not sure if there's a toilet. Tables and chairs are fixed to the floor.