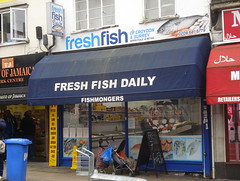 They also have another branch on Surrey Street.

According to a photo on Flickr, as of c. 1985 the premises were occupied by a business called Leach Bros (most easily visible at original size).

According to another photo on Flickr, as of December 1990 it was a "retail & wholesale" fishmongers called Surrey Fish Co, offering "quality fresh fish from leading ports daily".